The First round saw both fighters landing some heavy shots and testing each other, but it was steve who started to get the upper hand in the latter part of the round landing heavy roundhouse kicks to his opponents body.

Round 2 saw the FCA fighter on the advice from his corner to target his opponents body, with steve landing his trademark body shots, clearly putting his opponent in trouble and unable to defend him self the referee stepped in to call a stop to the bout, crowning steve the new champion.

Freestyle Combat Academy head coach Matt Braybrook said , this was a fantastic win going all the way to scotland and beating someone in there home town is always a tough task. I would like to thank the travelling supporters who travelled to scotland and the corner team for there help on the day. 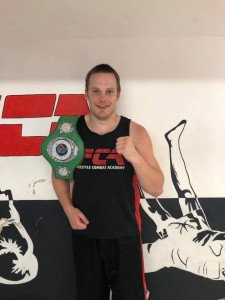