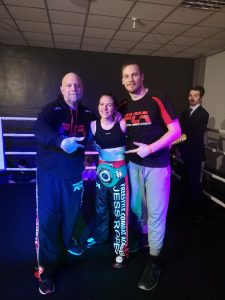 Both fighters weighed in under the 56kg upper limit. Both coaches had devised game plans to work towards their fighter’s strengths and their opponent’s weaknesses. It was an English title fight which turned out to be a tough one with both women skilled and prepared to have a war to take home the belt. Bevan came out strong, with big kicks to the body but Roper stuck to the game plan and used her tight defence, quick footwork and accurate powerful punches, to pick shots off and stay out of danger. It was a well-matched fight and Bevan fought extremely well over the 5 rounds, but Roper gained control early on, taking centre of the ring, finding her range and clean punch/kick combinations. It was Roper’s boxing skills that gave her the edge; being fairly even with the kicks, Bevan having slightly more power in her legs, but Roper being the faster fighter, picking shots off, using combinations to outwork her opponent and avoiding damage to secure the win on a majoratory decision and the title.